It was held in Naples, the inauguration of Mayors Adapt initiative, commissioned by the Directorate General of the European Commission’s Climate Action and founded assuming the EU adaptation strategy to climate change. Mayors Adapt supports the cities, creating an opportunity to engage visibly to act in favor of the adaptation from the design stage. While the Covenant of Mayors, approved by DG Energy, promoted mitigation strategies through the PAES, plans that have produced inventories of CO2 emissions for individual cities, here plans of adaptation to climate change are promoted.

The main objectives of Mayors Adapt are:
• help cities and local and regional governments to take a leading role in adapting to climate change, from the premise that act at the local level also benefits the global scale.
• guide the development of strategies for concrete action
•translate and accelerate action on adaptation to improve local resilience to climate impacts.
However, what is the adaptation to climate change, in this case? To understand the “meaning” of adaptation involves looking at the definition given in the White Paper of the EU, where the European concept of adaptation is manifested:
reduce the risk and damage resulting from adverse impacts (present and future) of the Climate Change in an efficient and cost-effective and exploit the potential benefits of the situation. There are necessary strategies and plans at national, regional and local level. To anticipate the impacts may reduce the future costs of damages. ” EC Adaptation White Paper, 2009 EU ”
The White Book states then that strategies are indispensable, but also plan for adaptation to take account of the risks. How does the adaptation towards risk? It is, in fact, a response, then the definition of risk is prior to the definition of a strategy and a plan of adaptation.
The Italian Adaptation Strategy (NAS) will build on that already adopted in other European countries. The National plan for adaptation to climate change will be the foundational premise for the success of Mayor Adapt.

Tab.1: What we have already done.

Setting priorities means to start a process of measuring the adaptive capacity of a city, so they are an important milestone in the framework of adaptation (Tab.2, Fig.1).

Fig.1: Countries in Europe with an adopted/finalized National Adaptation Plan. 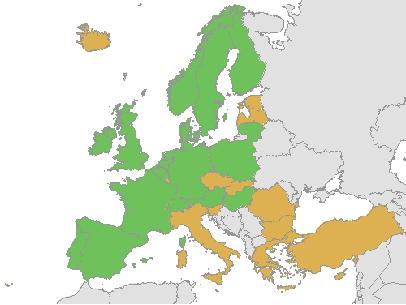 The report on adaptation in the Hanseatic city of Rostock, in Germany has been very interesting, for the comparison to the Italian case. Here, the adaptation process is already advanced and has produced some very interesting maps which reveal how the climate- service in Germany is a reality operating at a local level as well. Through the climate- service’s agencies, the communities can more easily build adaptation scenarios and choose their future.

Fig.2: Territorial runoff for specific basins. In urban areas, densely settled, the surface runoff water is higher than in the agricultural and forested areas. 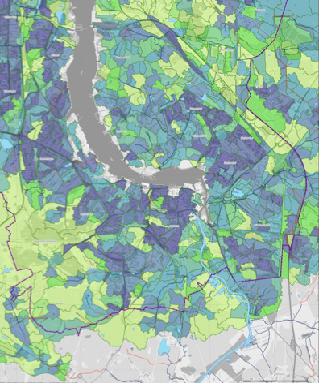 The conference was aimed to compete with other more advanced realities (as to indicate a possible goal to be achieved in mainstreaming and the communication of adaptation plans). The aim has been also to understand that Mayor Adapt continues in a sense, the experience of the Covenant of Mayors, integrating with the management of projects some significant activities, seeking synergies.

From PAES to local plans of adaptation: it was one of the slogans of the conference, which, placed the foundations of the previous Covenant of Mayors, arrive at the definition of Mayors Adapt: the goal is common (combating climate change), but conceptually it is necessary to distinguish between the two measures.

Europe speaks directly to local bodies, in both cases the driver was the leadership of Mayors. These leaders are called to give positive feedback to the territories. Thus, the references for the Adaptation Plans are: governance, stakeholders’ activation, local community involvement and heritage.

The national processing: a specific start of adaptation plans aimed at local communities with a common defined address (not in the content, but in the approach). Resilience to climate change calls into question the public authorities in a more massive way. It is necessary a coordination work that requires a territorial model of multilevel governance for the construction of local adaptation plans. There has been talk in depth of the Italian National adaptation strategy, which once adopted will be the framework to Mayor Adapt, at the local level.Transforming risk into a platform for joint action between mitigation and adaptation. The risk must be considered structural in relation to adaptation plans. So for the Italian NAS we define:

A human intervention in order to reduce the sources of or increase the absorbers of greenhouse gases. Here there is a global objective between the different sectors to reduce greenhouse gases. The benefits are indipendent from the places( where) and technologies(how).There is a common metric(tCO2 or$/tCO2)

The modification of natural or human systems in response to actual or expected climatic stimuli or their effects. The adaptation seeks to reduce the harm or exploits beneficial opportunities and includes strategies and national, regional and local plans. Adaptation responds to different risks, a common and unique objective lacks. The risks vary between different areas and time.

Adapting to climate change is a cross-cutting aspect, which affects, to varying degrees, all economic sectors, environmental systems and citizens.

If the adaptation is a response to the risks in the various sectors and is a long-term strategy, how does it compare with risks that change themselves in the time? Can we trust of future climate data projections or these conditions of uncertainty are also impacting on accountability, and so on governance among the actors in command of plans’ design? Building resilience on the territories would not be better, investing through win – win or no regret decisions while still having benefits, even if in the future there will be no more the expected changes? In the coming years, we will, therefore, also address proper management of risk as this may reduce the vulnerability of the area and provide benefits to the wider adaptation strategy.

Carolina Collaro is an architect and teacher, Master in Territorial Planning and Real Estate at Turin Polytechnic, Italy, since more than ten years involved in research and education’s field for sustainable development at the global and local scale. She has a strong background in this field at international level, acquired in prestigious universities: such as the EPFL and the University of Louvain-la-Neuve, as well as in U.S. and France. Visiting scholar at the Institute for advanced studies on science technology and society in Graz Austria, she is PhD candidate at Nova Gorica University, in Economics and Techniques of Environmental and Architectural Heritage Conservation, a post graduated program with IUAV-Venice University, Italy. The core of her researches is the adaptation strategies to climate change and ecosystem services’ conservation’s relevance for cultural landscapes and protected areas. She collaborates with UNISCAPE, Universities’ consortium for European Landscape Convention Implementation, and IUCN-CEM Commissions. View all posts by carolinacollaro