Living and moving around in a post-earthquake city

Seven years ago, during the night of 6 April 2009 the city of L’Aquila suffered one of the most tragic events in the modern history of Italy. At 3:32 A.M. a seismic event of 6.3 magnitude, which was preceded by a series of weaker shocks in the earlier days, killed over 300 persons and made a large part of the building stock uninhabitable.

Earthquakes are a kind of natural hazard that have accompanied the history of the mankind since the very early days. However, with an increasing tendency of people to concentrate in urban agglomerations, risks related to earthquakes become aggravated, because heavy shocks occur more and more often in densely populated zones. Therefore, both research and practice could learn a lot from studying the recovery process of cities that suffered seismic events.

The case of L’Aquila has been already well documented in the literature. Some important criticisms have been raised, which pointed out to mistakes in planning procedures before the earthquake, construction failures, and political responsibility. Further, some aspects of the reconstruction process have also been subject to discussion. In this post I wouldn’t like to explore these issues in detail, but instead I would like to touch a point that has not attracted much attention so far. It is the issue of urban mobility, and particularly the question how public transportation is organized in a post-earthquake city like L’Aquila. 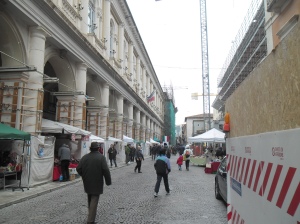 Historical core of L’Aquila under reconstruction

Cities of the Italian Mezzogiorno in general tend to be more automobile dependent than the cities of the Italian north, not to mention cities in Germany, the Netherlands or the Nordic states. Yet, even set against that background the role that the automobile plays in the everyday life of L’Aquila is impressive. Already before the earthquake, 80% of commutes to work were done by car, and that tendency has not changed substantially until the present day.

For a city of dispersed settlement structure, situated in a mountainous region, it is obviously not easy to create an efficient system of public transportation able to offer an alternative for the automobile. The post-earthquake reconstruction of L’Aquila has additionally strengthened the dispersion, because houses for those who lost their shelter in the earthquake, the famous “New Towns” promised by the Italian prime minister of that time Silvio Berlusconi, were built predominantly in the periphery. The reconstruction changed the land use structure of L’Aquila, by shifting population and functions, creating new attraction poles, but it is not clear to what extent the public transportation system has adapted to these changes.

Example of a new settlement in the periphery

The infrastructure of public transportation is in need of substantial investments. The bus terminal Collemaggio, a hub for both urban and interurban connections, could be considered a good example of modern architecture in the 1980s. The same could be said with regard to the technical standard of the vehicles. Buses are the single means of public transportation operating in L’Aquila, since the construction of a monorail, which had been initiated already before the earthquake, was abandoned due to controversies. That negative experience for sure does not support a good climate for new investments in public transportation in L’Aquila, but these appear to be urgently needed. There are different ideas for “greening” urban mobility in L’Aquila. One option would be to promote commuting by train, using the existing regional line, which appears to be underutilized so far.

But apart from large infrastructural investments, the public transportation system of L’Aquila could also benefit from some measures of a different nature. “Hard” investments are necessary, but ideally they should be accompanied by some “soft” measures. A good step forward would be, for example, to improve the access to accurate and reliable information about schedules, connections and transfers. A kind of on-line trip planner, which is already available via different platforms for many cities worldwide, does not exist for L’Aquila so far. Moreover, the organization of the public transportation system is hardly comprehensible at a glance.

The objective of a research project launched at the Gran Sasso Science Institute in L’Aquila is to go in the direction of promoting “soft” measures that would contribute to a higher quality of public transportation in the town. In this regard, the project team collects spatial data related to urban transportation, makes analyses of accessibility as well as works on related software tools. The research could be considered a small contribution to the post-earthquake relaunch of L’Aquila.

The reconstruction of L’Aquila is an on-going process that will last for the several next years. What is already clear is that a city that will emerge out of the ruins will be a different one. Paradoxically, the reconstruction is also an opportunity for a positive change. Whether that change would also affect the public transportation system, remains still open at that point.

Urban geographer, postdoctoral research fellow at Gran Sasso Sciencie Institute in L'Aquila, Italy, and assistant professor at Adam Mickiewicz University in Poznań, Poland (currently in sabbatical). Research interests include urban and housing policies, with a particular focus on the post-socialist context.
View all posts by Adam Radzimski →
This entry was posted in Planning, city, and society, Sustainability and resilience and tagged city, communication, Italy, planning, research. Bookmark the permalink.