The Power of Sun: A Snapshot of Global Photovoltaic Markets

Our society greatly relies on energy use. Energy resources, such as oil and gas, are limited and their availability is strongly connected – although not limited – to both the relations with producer-countries and their political stability. In order to clear the threats to energy security, especially in a climate of political tensions (Heshmati & Abolhosseini, 2016), and to reduce the greenhouse emissions (Creutzig et al., 2014) related to the employ of fossil fuels, we are experiencing an energy transition towards the deployment of renewable energy.

In the last decades the spread of renewable sources of energy has been variously supported – also financially – by local governments that determined the success of one or the other energy source.

Recently, the International Energy Agency (IEA) released the data related to the global photovoltaic deployment aiming at providing information concerning the development of the PV market in the last years.

At the end of 2015 the globally installed capacity was at least 227.1 GW, 10 times higher than in 2009. 30 GW are supposed to have been installed in countries that do not participate in the Photovoltaic Power System (PVPS) programme, but the remaining 197 GW of cumulative PV installations have been deployed in 24 IEA PVPS countries. The snapshot shows that after a limited growth of the photovoltaic market in 2014, 2015 has been the year of records with an expansion of 25% – corresponding to a global installed capacity of 50 GW – compared to the 40 GW of the 2014. Nowadays, PV provides about 1.3% of the global energy demand. China, Germany, Japan, the USA and Italy are the leading countries with respectively 43.5 GW, 39.7 GW, 34.4 GW, 26.5 GW and 18.9 GW of cumulative installed PV capacity (Table 1). All the other countries have installed less than 10 GW each.

In 2015, China broke the record of the highest annual installed capacity in a single country with 15.2 GW and 43.5 GW of cumulative installed capacity at the end of the same year. Impressing is the growth also in developing countries and in new markets such as India with more than 2 GW installed and Pakistan that appears to be promising with its several hundreds of MW together with Turkey that installed for the first time 208 MW. In Africa, South Africa was a leading country in 2014 with 2 GW installed, but it has experienced a decline in 2015 with a subsequent restart. Besides, in 2015, in the USA, the PV market of North America reached 7.5 GW.

In 2015, Europe experienced a decline since in various countries was phased-out the feed-in-tariff and, in others, such as Germany, the supporting scheme was modified. In Europe, the installed PV represents at least 3.5% of its electricity demand and approximately 7% of the peak electricity demand. In 2015 the increase in the British PV market was dominant in Europe for the second year in a row with 3.5 GW.  Nevertheless, in Europe, Germany is still the leading country with 39.7 GW of cumulative installed capacity in 2015. Particularly important are the data about the ratio between the PV installed capacity and the energy demand of a country since it is referred to its energy security. The PV installed capacity in Italy, Greece and Germany covers respectively 8%, 7% and 7.1% of their electricity demand (Figure 1). 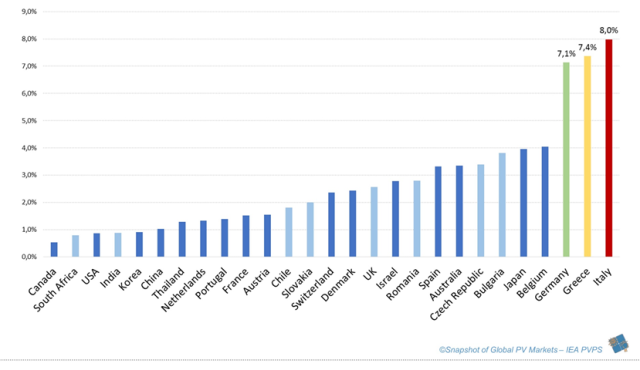 Figure 1 National PV penetration in % of the electricity demand based on 2015 capacities. Source of the caption and figure: (International Energy Agency, 2016)

In the last years Europe contributed mostly to the global PV installation, although since 2012 the PV capacity installed in Asia is rapidly growing.  Nowadays, both Europe and Asia represent approximately 42% of the total installed capacity, the USA supplies the 13% and the Middle East and Africa together contribute to the remaining 3% (Table 2).

Table 2 Top 10 countries for installations and total installed capacity in 2015. Source of the caption and table: (International Energy Agency, 2016)

At the end of 2016 it is foreseen that the PV installed until January 2016 will provide around 275 billion kWh that represents approximately 1.3% of the global electricity demand.

I am currently a postdoctoral fellow at the Edinburgh Napier University. My research interests are: climate change, environmental assessment, urban studies, assessment of urban ecosystem services with a specific interest in broadening Life Cycle Assessment (LCA) application to the evaluation of the environmental and urban policies. From 2014 to 2016 I was research associate at Federal Institute for Materials Research and Testing in Berlin (Germany). In 2013 I was a Dahrendorf postdoctoral fellow in the working group on Infrastructures and Climate Change. In 2012 I was research fellow at the Italian National Agency for New Technologies, Energy and Sustainable Economic Development (ENEA) in Bologna, Italy. On March 2011 I earned a Ph.D. in Engineering at Polytechnic University of Bari (Italy) with an inter-disciplinary thesis on LCA focused on the implementation of the LCA methodology to include the effect of variation in urban albedo on climate. During my Ph.D., I was visiting scholar at Columbia University’s Center for Climate Systems Research, based at NASA-Goddard Institute for Space Studies in New York City, a world leading institution in climate research. In 2012 I obtained from Urban Environmental Pollution 2012 (Elsevier) the Young Research Scientist Award for my research. In the same year I got a sponsorship from the European Space Agency (ESA) to present my research at NASA´s International Workshop on Environmental and Alternative Energy held in Greenbelt, Maryland (USA).
View all posts by Tiziana Susca →
This entry was posted in Sustainability and resilience and tagged clean energy, energy production, energy use, photovoltaic energy, photovoltaic market. Bookmark the permalink.

3 Responses to The Power of Sun: A Snapshot of Global Photovoltaic Markets