The Two Dimension of the UHI

UHI is mainly dependent on the modification of the urban energy fluxes and, as a consequence, on the synoptic conditions in urban and rural sites. UHIs are characterized by two dimensions: an extension and a vertical profile. Typically, the UHI is plotted with closed isotherms indicating the area of the urban surface characterized by high temperatures (Oke, 2006).

The cross-section – that is also the icon through which the UHI is represented – typically possesses ‘cliffs’ at the urban-rural fringe and a ‘peak’ in correspondence of the most built-up core of the cities (Pon, 2007). 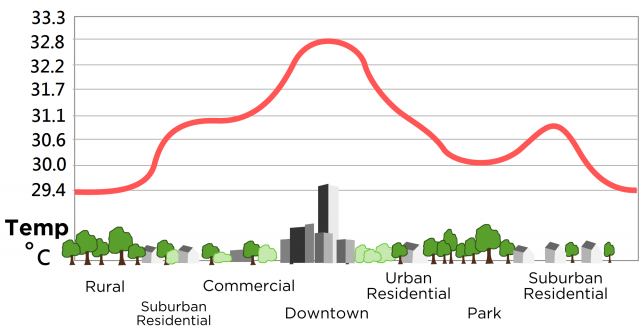 As demonstrated in many studies, the UHI dimension depends on the city-core extension, the most densely urbanized areas of the city (e.g., Unger, Sümeghy, Gulyás, Z., & Mucs, 2001). In the city core the natural energy balance is mostly modified by the substitution of natural materials with man-made ones (Oke, 1982). At meso-scale, in calm weather conditions, UHI has the shape of a dome at urban boundary layer; while, in case of steady regional airflow its shape is a plume at planetary boundary layer (Oke, 2006; Shahmohamadi, Che-Ani, Ramly, Maulud, & Mohd-Nor, 2010).

The effects of UHI at different scales can be summarized as follows:

Oke defined an empirical correlation between the magnitude of the UHI and population for both American and European cities (Landsberg, 1981). For the North American evaluation, Oke plotted the data about UHI recorded in ten settlements in Quebec and eight cities in the other states. He determined through a regression analysis the following relationship valid for the North-American cities:

The relationship between population and UHI maximum intensity (equation 2) explains 96% of the variance with a standard error of ±0.7°C (Oke, 1976).

For the European cities the same relationship is explained by the following formula: 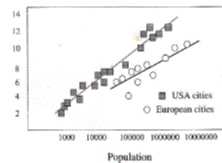 Oke analyzed different cities characterized by topographic elements of minimal influence on UHI (Oke, 1982). Population was chosen as a synthetic parameter in order to evaluate the increase of urban temperature because it is characteristic not only of the number of people living in a city but also of anthropogenic heat release and alteration of surface conditions. The difference between the regression analysis carried out for the North-American cities and the European ones is the symptom of how differently cities have been built up in the two continents (figure 4). Moreover, Oke (1973) found an empirical correlation between UHI and population (P) and mean wind speed (ū):

Bonan (2002) revised the previous relations between UHI and population as follows:

Equation 4 Relation between UHI and population in North-American cities

Equation 5 Relation between UHI and population in European cities

Many other studies focused on the relationship between urban sprawl and urban temperatures. The analyses of the temperatures of the last 148 years, conducted by Bacci and Maugeri (1992), reveal an increase in the difference between urban and rural temperatures of 1.4°C in the last decades in Milan. Bacci and Maugeri also analyzed the relation between the urban sprawl and the UHI in Milan. According to the authors, the UHI (∆Tu) in Milan can be expressed through the increase in the city radius (R) as follows:

Equation 6 Relationship between Milan city radius and the UHI

Equation 7 Relationship between Milan city radius and the UHI

Where T is the air temperature expressed in degrees Celsius [°C], R is expressed in [km], and R0 is equal to one kilometer.

The correlation between the increase in the urban temperature and the urban sprawl in Rome is confirmed by Bonacquisti et al. (2006). Comparing the minimum temperatures in the period 1964-75 (the period of the most consistent urban growth) with 1831-1910, the authors observed a rise of 1°C. Moreover, the authors affirm that the UHI in Rome mainly depends on the thermal properties and on the urban geometry, but it is not strongly influenced by anthropogenic heat releases. Colacino and Lavagnini (1982), in their study, attribute the presence of the UHI in Rome not only to the modification of the urban structure but also to the distance from the coastline. The maximum temperatures recorded during summer and winter in Rome, in an inland suburban area and in a coastal site, were compared. The results of their inquiry show that the sea breeze mitigates the maximum temperatures both during summer and during winter. The effects of the sea breeze are visible up to a distance of approximately 10 km.

* Rearranged text from: Susca, T. (2011). Evaluation of the Surface Albedo in a LCA Multi-scale Approach. The Case Study of Green, White and Black Roofs in New York City. Ph.D. Thesis

I am currently a postdoctoral fellow at the Edinburgh Napier University. My research interests are: climate change, environmental assessment, urban studies, assessment of urban ecosystem services with a specific interest in broadening Life Cycle Assessment (LCA) application to the evaluation of the environmental and urban policies. From 2014 to 2016 I was research associate at Federal Institute for Materials Research and Testing in Berlin (Germany). In 2013 I was a Dahrendorf postdoctoral fellow in the working group on Infrastructures and Climate Change. In 2012 I was research fellow at the Italian National Agency for New Technologies, Energy and Sustainable Economic Development (ENEA) in Bologna, Italy. On March 2011 I earned a Ph.D. in Engineering at Polytechnic University of Bari (Italy) with an inter-disciplinary thesis on LCA focused on the implementation of the LCA methodology to include the effect of variation in urban albedo on climate. During my Ph.D., I was visiting scholar at Columbia University’s Center for Climate Systems Research, based at NASA-Goddard Institute for Space Studies in New York City, a world leading institution in climate research. In 2012 I obtained from Urban Environmental Pollution 2012 (Elsevier) the Young Research Scientist Award for my research. In the same year I got a sponsorship from the European Space Agency (ESA) to present my research at NASA´s International Workshop on Environmental and Alternative Energy held in Greenbelt, Maryland (USA). View all posts by Tiziana Susca