Posted on May 22, 2017 by chandrimamukhopadhyay 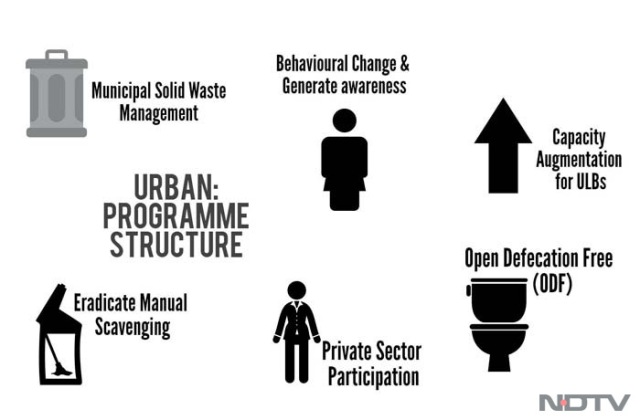 A framework on objectives of Swachh Bharat

Modi Government’s ‘swachh bharat’ (here) is an initiative taken by the central government of India that literally means “clean India”. The reform formulated by Prime Minister Modi is influenced by Gandhiji’s one moto: “Quit India, Clean India” during British Colonisation period. Modi government has widely campaigned for such “Clean India” movement (here). While the policy reform is primarily meant to contribute towards public health, in the blog, I argue that there are wider benefits to be reaped from the policy, especially in the light of contemporary urban issues in Indian context, related to resource depletion and sustainability. Moreover, Prime Minister Modi emphasizes on the fact that such a movement require wide public participation, it is part of a bigger global movement known as Healthy Cities movement promoted by World Health Organisation (WHO). In the later part of the blog, I discuss ‘Healthy Cities Movement’ in detail.

One of the main components of Swachh Bharat was to make cities open defecation free; this is, to deliver and maintain individual and public toilets, open defecation being a common urban issue in Indian cities. For the state of Maharashtra, Regional Centre for Urban and Environmental Studies, All India Institute of Local Self Government (here) has been instrumental in delivering ODF cities. Performance Assessment System (PAS) project (here) at the Centre of Water at CEPT University, Ahmedabad played a key role in the project in the state of Gujarat and Maharashtra. It is a five-year Action Research Project funded by Bill and Melinda Gates Foundation. The project is on developing appropriate tools and methods to measure, monitor and improve delivery of water and sanitation services in urban India. While open defecation has been a typical issue in Indian cities, many government policies on providing community toilet and individual toilet have failed to achieve the outcome in low income communities for various reasons including people started using those such hard infrastructures for domestic purposes, and still chose to continue open defecation. The policy document on open defecation refers to removing indignity and improving public health. In the context of India, especially for women, there are safety and violence issues related with open defecation. Specially there are at least more number of such cases reported nowadays, and safety of women has become one important issues. The program is expected to contribute towards women safety.

While there is an obvious component of hygiene related to controlling open defecation, there are wider implications. Many old cities do not have separate storm water system and sewage system. Cities in India are facing water crisis as a combined impact of climate change and fast urbanisation. There is rapid urbanisation rate and depletion of resources. Many old cities are now replacing the traditional urban water system with wastewater recycling system and grey water harvesting to deal with water crisis. The assumption is that collected rainwater, i.e., the storm water can be recycled for other uses without treatment. However, the high rate of open defecation jeopardise such a possibility of reusing storm water. Hence, it is imperative that cities are ODF so that cities can successfully operate its water reuse and recycle system. While access to water is a serious issue across the globe, it is acknowledged that urban water system is interconnected and has to be maintained as an integrated one. ODF cities will not only contribute towards clean city and public health, but also to efficiency of the water recycling system. The concept of urban metabolism can be applied here, as it deals with inflow of resources to the city, and outflow of resources from the city, which goes back to the natural environment. Scholars from pure science background are using the concept of urban metabolism to measure the quality and quantity of groundwater table in Bangalore.

Another component of Swachh Bharat is door-to-door waste collection programme. However, there is no mention of segregating waste at the source in the policy document. The website indicates that a higher percentage of our waste can be recycled though. There is also no mention of policies to encourage little waste generation, or punishing for generating waste beyond a limit. However, for contemporary Integrated Township project, private sector developers and managers use such concept. The Magarpatta City model in Maharashtra practices such segregation of waste at source by providing containers of different colours, which is efficient and unique. Surprisingly, many old cities have a traditional system of dumping the large chunk of non-segregated solid waste from the whole municipal area at a single location, where it is manually segregated by informal and low-income workers. This leads to serious health hazard for them. Implementing such practice of segregation of solid waste at source will be a milestone. Although this is challenging in old cities, it is being practiced in bits and pieces. For instance, one municipal district of Kolkata had partially implemented the same, and was awarded an international award (here). The city of Curitiba demonstrates a wonderful example of the segregated solid waste collection at the source for the whole city.

Healthy Cities Project
World Health Organisation’s ‘Healthy Cities project’ is a global movement (here). It engages local governments in health development through a process of political commitment, institutional change, capacity-building, partnership-based planning and innovative projects. I would like to connect the national reform on Swachh Bharat with the international movement on Healthy Cities Project, reference to water supply and sanitation sector is mandatory to any traditional healthy city and public health debate.

Citizen participation
For the success of Swachh bharat, Modi has called on the mass for participation, as without their participation, it is not possible to achieve this. While this is a very noble step, I believe no single decision is taken in isolation. Many scholars have written about how the public sector participation windows are captured by elite and upper middle classes at the local government level, in spite of the legal framework being in place. Although private sector entrepreneurs are working in the area of solid waste management with innovative technological solutions, they repeatedly mention that operation in the area of solid waste collection and management is territorial in nature, and hence, often encountered with illegal actors. Finally, to achieve the objectives of swachh bharat, the local governments will have to address the informal and illegal workers’ Right to the City, which has been raised by New Urban Agenda, and have been an issue of conflict with the local governments.

To conclude, each of the issues mentioned above, as ODF cities, solid waste management, and Right to the City, are way deeper, and can contribute towards blogs on their own.

This entry was posted in Uncategorized. Bookmark the permalink.